Having created an impressive range of expensive high-end turntables, Vertere’s latest offering is something a little less exotic and costly in the form of the DG-1 Dynamic Groove record player, complete with innovative Groove Runner tonearm. The aim was to make a high-quality vinyl spinner that was easy to use and simple to set up.

Vertere wants the DG-1 to be seen as a serious but fun turntable that offers great looks and performance with genuine ease of use. It’s offered in several combinations. The basic deck and arm costs £2,950 and includes the D-Fi interconnect cable and a stylus balance. For an extra £150, there’s the Magneto package which includes a Magneto moving magnet cartridge. The £3,600 DG-1 Redline package excludes a cartridge but has the Redline interconnect cable, a stylus balance, Techno mat, and a set of ISO Paws isolation feet. The Redline package with Sabre cartridge tested here costs £4,300. 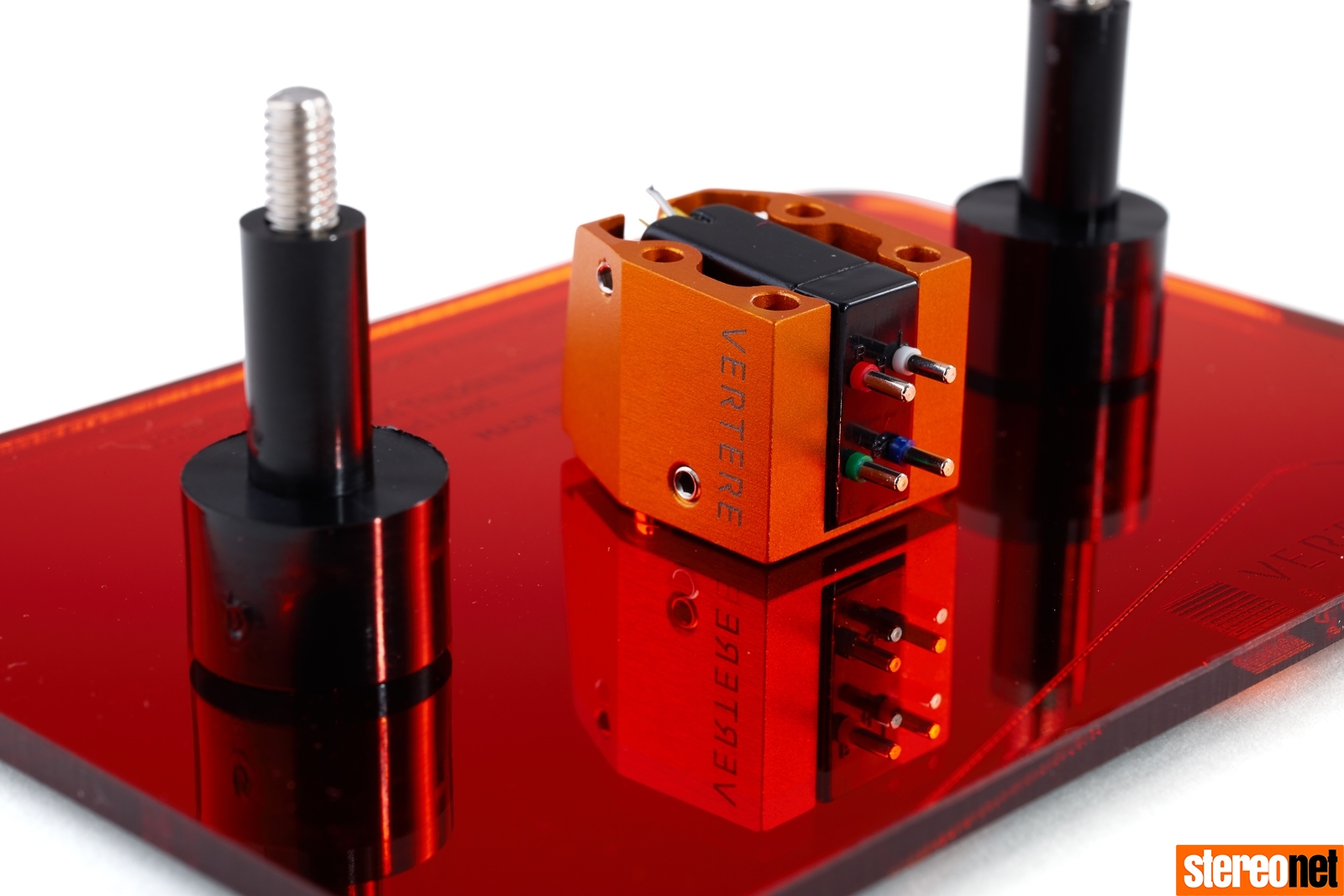 Although this new turntable bears some visual resemblance to the company’s more expensive decks, designer Touraj Moghaddam started from scratch. As seasoned analogue addicts will know, he’s one of the most accomplished turntable designers in the industry – with the classic nineteen-eighties Roksan Xerxes as his starting point. For the DG-1, it wasn’t a question of taking one of the more expensive models and simply making it cheaper. Instead, it was designed to a standard rather than a price, but with lower-cost materials used in such a way that performance wasn’t too compromised.

The deck has a belt-driven platter running at 33 or 45RPM. The motor, a decoupled 24-pole microprocessor controlled design, is powered from a small plug-top power supply. It’s able to run at any mains voltage between 100V and 240V, at 50Hz or 60Hz. The platter is 5mm thick and weighs 1.5kg. It’s a three-layer construction of aluminium, cork and acrylic. The centre bearing is said to be made from stainless steel to a tolerance of 5 microns and runs on a tungsten-carbide ball. The bearing housing is made from brass.

Although the platter is fairly light, it takes around forty-five seconds for it to stop spinning from 33RPM with the belt disconnected. This highly respectable result indicates a very low friction bearing. The belt is made from silicone rubber and feels quite grippy. Start-up time is fast at less than one revolution.

The chassis of the DG-1 is 15mm thick and made from three acrylic layers with decoupling at key points. The whole assembly sits on three adjustable support feet. It all looks simple enough, but doubtless, much experimentation was needed to get things sounding right. The deck itself measures 469x384x130mm with its hinged lid in situ. Yes – you read that right – it comes with that rarest of things, a proper hinged lid! Not only does this keep dust off the deck, but it affords protection too.

The innovative Groove Runner tonearm is solid and flat, rather than a tube. It’s around 3mm thick with an effective length of 240mm. Cartridge offset angle is 22.9 degrees. The arm beam is an aluminium/polymer sandwich, and the vertical ‘bearings’ are 6 threads, rather than the usual gimbals. This effectively means that it’s suspended. Because the support threads are fairly short, and there are six of them, the arm does not feel excessively loose or wobbly. The benefits of this arrangement include no bearing stiction and potentially useful decoupling.

Arm wiring is a gold plated printed circuit board-type cable, in a single piece from the cartridge tags to the phono sockets on the back panel. Connection to the phono stage is via a cable having RCA plugs at both ends. It tops off what is a genuinely interesting tonearm design that’s a world away from the usual bundled Jelcos or OEM Rega types.

For this review, Vertere supplied its Sabre moving magnet pickup cartridge. It features a precision-machined CNC body milled from a solid aluminium block, with the stylus and generator fixed to the body via four spiked bolts. The generator features small, light, high strength Alnico magnets, and no adhesives were used in the mounting. The Sabre produces a claimed 4mV output and weighs around 10.3g. Its frequency response is said to be from 15Hz to 25kHz, with compliance of 10cu. It has a nice protective stylus guard too!

The Sabre’s rigid construction mirrors the best MC designs, and perhaps as a result, it offers crisp dynamics and superior detail compared to typical MM cartridges. Recommended playing weight falls between 1.9g and 2.1g. I found its tracking ability to be good, but for very highly modulated LPs you will need to set the downforce to the 2.1g maximum. The stylus is elliptical, and user-replaceable should the need arise.

The DG-1 has a warm, smooth and tonally rich presentation. The sound is detailed and clear but not clinically sharp or immediate. If I describe it as ‘very analogue’, that’s meant as a compliment! Through Vertere’s own Phono 1 Mk II phono stage, I found this turntable package to be both inviting and relaxing to listen to. Its presentation focuses your attention on the music rather than the sound of the music.

Speed stability is outstandingly good, with no hint of pitch-wobble or waver unless playing an LP pressed off-centre. Having recently acquired a vintage Thorens TD 124 from 1966, I’m only too aware that rock-solid speed stability isn’t something you should necessarily take for granted! The Thorens looks and sounds gorgeous but does sometimes misbehave and needs loving care and attention. By contrast, the DG-1 reminded me of how good an excellent modern deck can be. 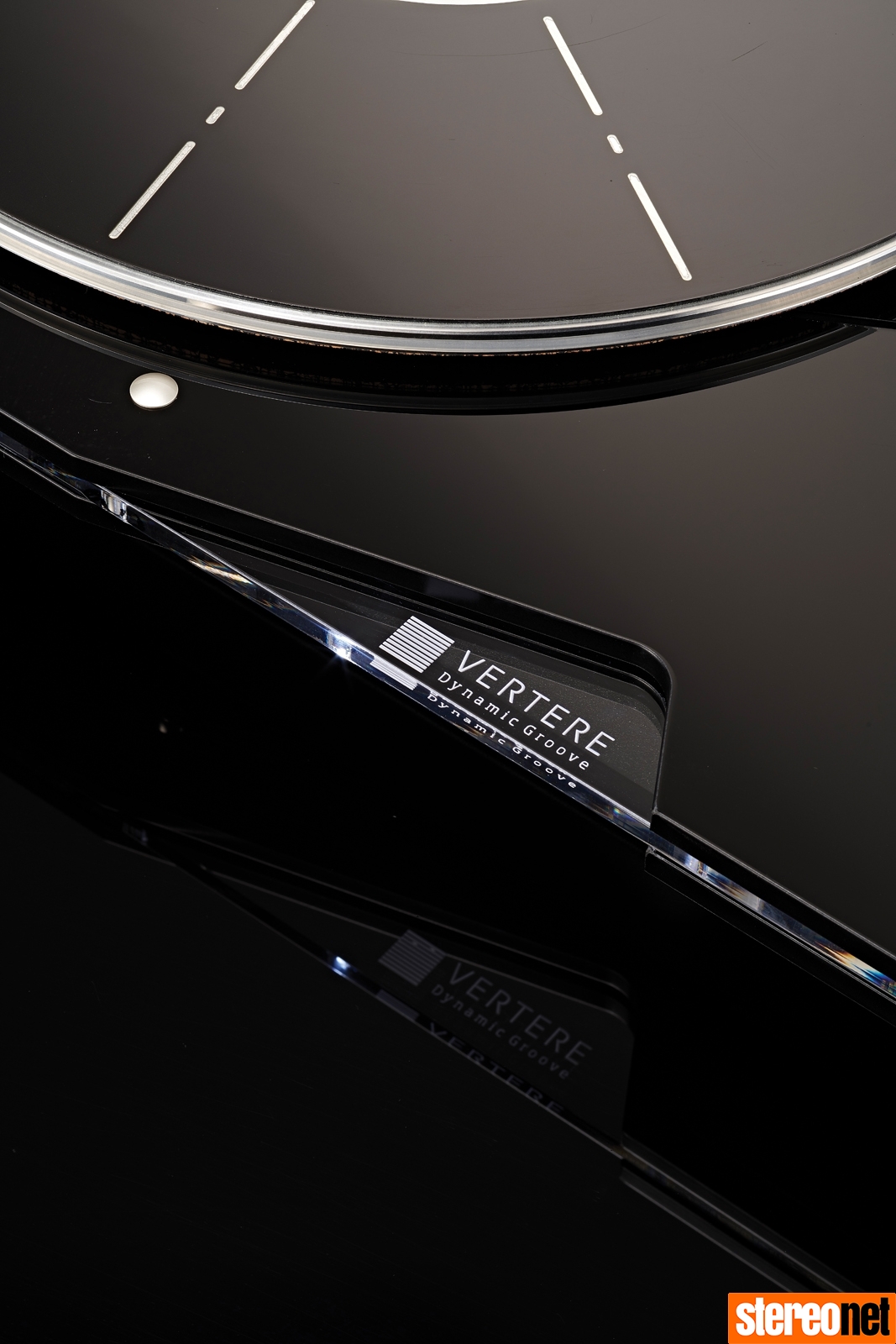 How nice to use a turntable that just works faultlessly from the moment you switch it on! I found the DG-1/Sabre combination a wee bit more sensitive to LP surface noise compared to Origin Live’s excellent Resolution, for example, but not by much – and rumble is vanishingly low. Although not quite as detailed and immediate sounding as my TD 124 running an Origin Live Illustrious tonearm and Transfiguration Aria cartridge, the baby Vertere proved superior when it came to reproducing space and depth. It delivered a holographic musical presentation.

Playing Pierre Boulez’ 1990 DG recording of& Stravinsky’s complete Petrouchka ballet, recently issued on LP, this extra space and depth was very noticeable. On CD, the recording always seems a bit thin and flat. The vinyl release played on the Thorens sounded better but still not ideal. However, on the DG-1, wind and brass instruments were noticeably more dimensional with increased air and space. While the Thorens sounded more precise and detailed, with slightly greater dynamic range, the end result was a bit like CD at its best, rather than analogue. 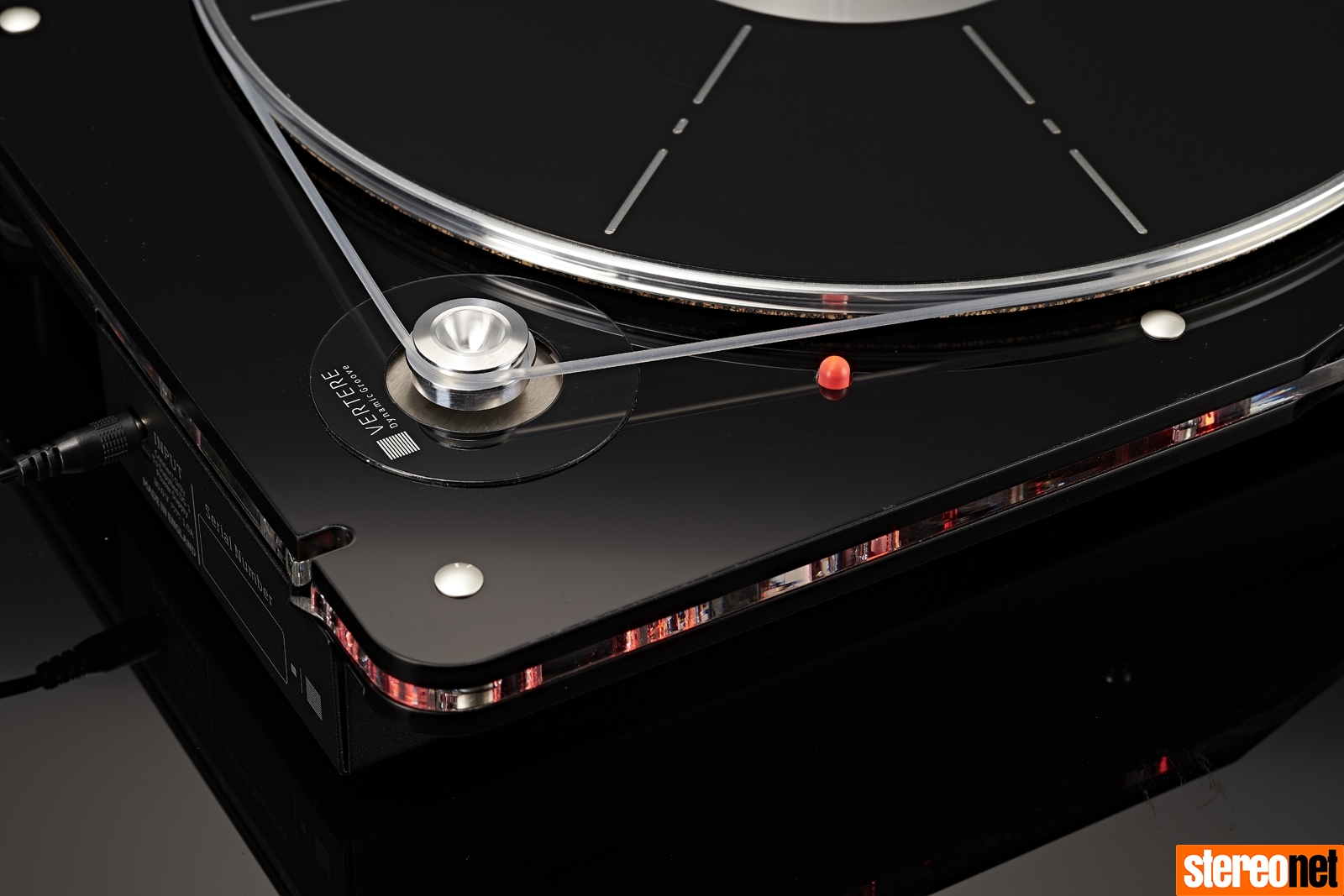 I noticed something similar playing an LP of traditional Cantonese music for stringed instruments. Maybe the DG-1’s rounder, sweeter and more generalised character didn’t quite have the maximum possible precision and focus, but the music itself was exceptionally nice to listen to. The DG-1 just gave me the music – in a deceptively self-effacing way. It conveyed oodles of musical clues without an excess of detail becoming distracting.

I used the DG-1 with Vertere’s optional Techno mat. Removing this resulted in a slightly leaner and brighter sound that was more immediate and detailed. However, although the added immediacy wasn’t unwelcome, overall, I preferred results with the mat. Playing Ry Cooder’s album Jazz, for example, the sound was warm and relaxed yet tactile and clear. Bass on the DG-1 is fuller and rounder than the Thorens/Origin Live combo. I also played a bit of Cooder’s Crossroads album – the voices on Down in Mississippi sounded great!

Bartok’s Wooden Prince ballet on CBS with Boulez shimmered impressively, creating a highly atmospheric ambience. I enjoyed it so much that I actually played it twice! Staying with CBS and Ormandy’s early nineteen sixties recording of Prokofiev’s 6th Symphony sounded surprisingly rich and detailed. Music to my eyes, as they say! 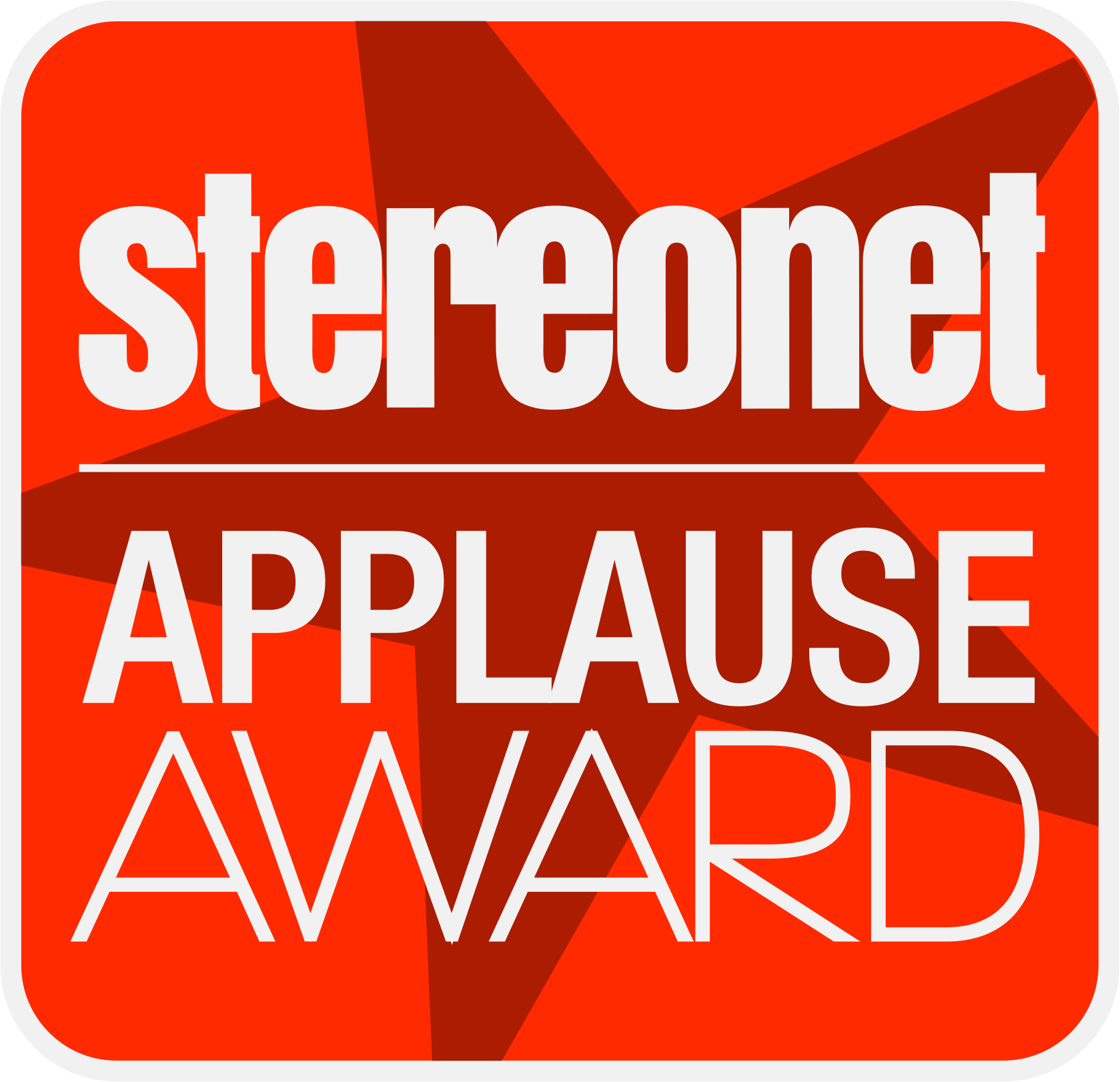 Thumbs aloft, then. I liked Vertere’s new DG-1 very much and really enjoyed both listening to it and using it. I loved the sound, but the experience was made all the more pleasant by numerous little detail touches, like the fact that it had a hinged lid, an easy-to-fit protective stylus guard and a widget that locks the arm in its resting place to prevent it getting knocked accidentally.

Overall then, this is a stylish and well-designed package. Alongside its stellar sonic performance at the price, many will love the cool looking internally-lit three-layer acrylic and steel chassis, and that crazy tonearm. Despite its visual complexity, it’s one of those products that just works faultlessly after it’s installed, needing little maintaining once up and running. Get into the Groove, if you possibly can!

An avid audiophile for many decades, Jimmy has been writing about hi-fi since 1980 in a host of British magazines, from What Hi-Fi to Hi-Fi Choice. Based in London, England, he’s one of the UK’s most prolific record and CD collectors – no streaming service can yet match his amazing music collection!