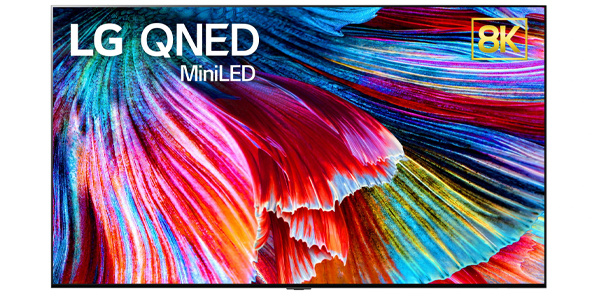 While LG’s Nanocell technology has greatly improved the quality of the brand’s LCD TVs over the past couple of years, their persistent use of relatively low-contrast IPS panels has tended to stop them from receiving anything like the critical adulation enjoyed by LG’s OLED TVs.

That could be all about to change though, with the addition of new ‘QNED Mini LED’ technology to LG’s 2021 TV range.

This new technology claims to combine two key factors in its new LCD panel design: even more spectacular but also refined performance from its enhanced Quantum Dot/Nanocell colour system, and emphatically enhanced contrast from a Mini LED lighting system that LG claims can deliver a contrast ratio as high as 1,000,000:1.

While this claimed contrast ratio figure is likely to be much more theoretical than anything you’ll see in real-world viewing conditions, it still points to an unprecedented contrast performance from the new QNED Mini LED TVs by LG LCD standards. It’s achieved by fitting the new flagship LCD models with larger numbers of smaller (mini) LED lights positioned directly behind the screen, and then providing separate control over far more zones of those smaller lights than you get with LG’s customary LCD sets.

To put some numbers on this, LG claims that the 86-inch 8K QNED Mini LED model it’s set to ‘virtually’ unveil next week will feature almost 30,000 separate LED lights, and almost 2,500 separate dimming zones. While these numbers will be lower for the 4K QNED Mini LED models (exact figures are yet to be confirmed), they’ll still doubtless be a substantial improvement over the few dozen dimming zones typically deployed on even the best of LG’s previous 8K and 4K LCD TVs. And experience suggests that having so much localized light control to play with really can transform any LCD TV’s performance.

If you’re wondering where QNED Mini LED technology sits in relation to LG’s acclaimed OLED TVs, LG points out in the press information on its new LCD sets that even Mini LED technology can’t rival the sort of local contrast precision and purity you get from OLED TVs’ self-emissive screens. So it appears that LG still sees OLED as it premium TV performance technology.

However, if the new LCD sets can combine their apparently much better black levels and backlight control with more brightness than you can get from LG’s 2021 OLEDs, then they may well find an enthusiastic new audience.

The QNED Mini LED TVs will slot in above the Nanocell models that counted as LG’s previous flagship LCD ranges. The brand isn’t yet sharing exact model numbers, pricing or other range details, though, other than confirming as mentioned previously that there will be an 86-inch 8K model. This 8K model could be particularly interesting, actually, given that it will almost certainly be vastly more affordable than 8K OLED TVs currently are.

More details on LG’s 2021 LCD and OLED TV ranges will be announced in the next couple of weeks as part of the now-virtual CES 2021, so keep an eye on Stereonet for further details.