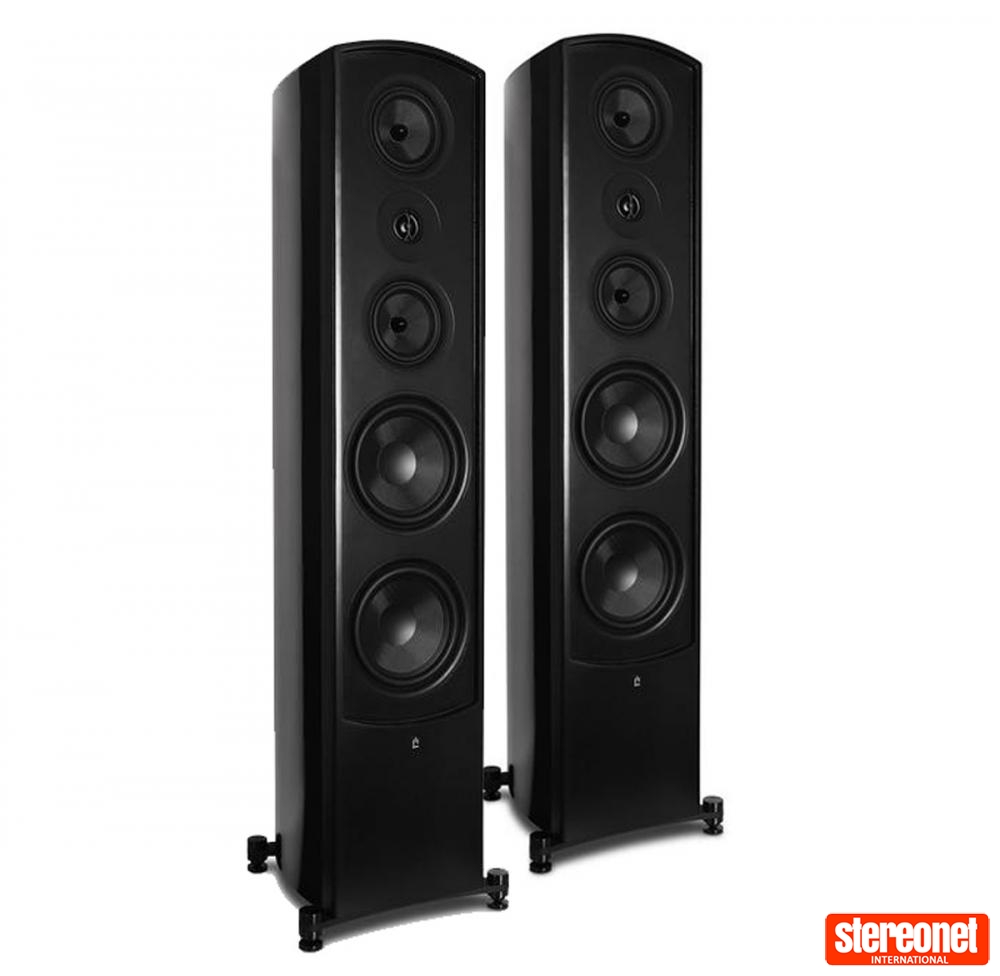 Aperion Audio is a relatively small company from the suburb of Wilsonville, Oregon. It was started by Win Jeanfreau, who felt that in 1998, there was an opportunity in the market for an affordable line of speakers that would satisfy the demand. By eliminating the distribution channel and selling directly to the consumer, he built a sustainable business during the era of the big-box electronics stores.

Twenty-three years later, Aperion launched its Verus III Concert V8T Tower speaker for $1,999 per box as an upgrade to the former Verus III Grand Towers. By replacing the 6.5-inch woven Kevlar woofers of the older model with 8-inch drivers, the aim was to enhance low-frequency response and impact on bass-heavy music and movies. The speaker is said to be tailored for audio enthusiasts seeking a full-bodied soundstage solution for their two-channel environment, or a front stage in their powerful home theater. It appears to have a lot to offer the budget-minded consumer, between pricing, aesthetics, and versatility.

Aperion first announced the arrival of the flagship V8T Concert Towers in March of 2021; it's the third evolution of the speaker since the Verus line's initial release in 2010. The company shared with me that they employed a team of engineers and musicians from the US, Germany, and China. They spent countless hours sourcing the raw materials and testing different speaker components to meet the quality expectations they felt their customers had come to expect.

After Aperion engineers designed the drive units, they took them to their testing labs to install on an infinite baffle to measure their proper TS parameters and frequency curves. Once the drivers met their expectations, the design team used software to begin the analog computation for cabinet size/volume, and produced the raw wood cabinets for further testing. From that point, they installed the crossover to the bare cabinet with the drivers.

The team then tested the speakers using a variety of electronics and different room sizes – some acoustically treated, others as open rooms – while also taking prototypes to their personal homes to audition. They went back and forth until they got the sound they were looking for. Along with the different test environments and components, they also checked their sound side-by-side with other brands to compare and contrast their findings. 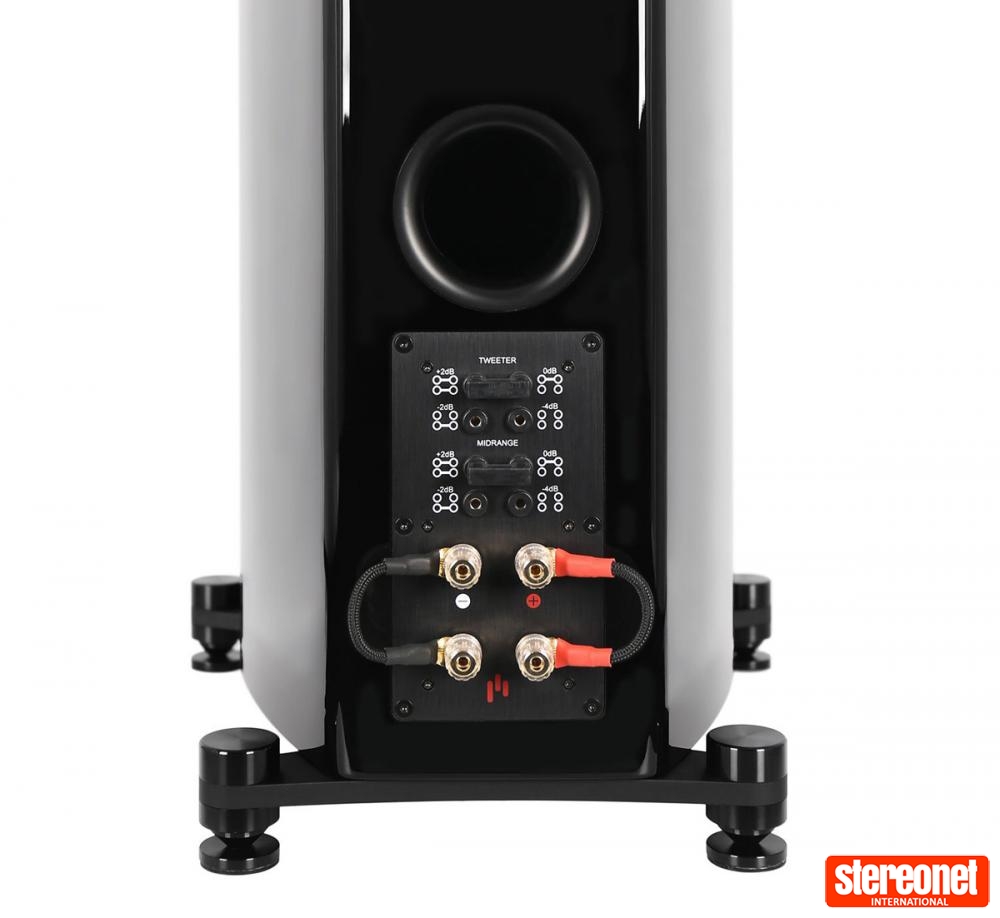 These loudspeakers come well packaged in a purple velour cover with golden ties, which is a bit ostentatious. Still, I guess Aperion wanted to start the ownership experience with the unboxing. This is a welcome change from the typical white cloth that typically adorns speakers during the unpacking process. One of the first things I noticed after getting the V8Ts out of their boxes – aside from the staggering 51” height of each speaker – was their sexy curved cabinets. Dallas, Aperion's General Manager, informed me that the MDF cabinet's curvilinear aspect helps with standing waves inside the chamber. The enclosure was also one of their main challenges as the curvilinear cabinets are difficult to produce. There are apparently over 260 procedures to make the cabinets according to Aperion's QC standards. That's as well as the painting process, which is surely time-consuming.

The black gloss finish of the review sample was immaculate, and of course, I prefer a black speaker. However, the gloss cherry wood veneer towers and bookshelf speakers' strips are cut from the same tree to ensure the wood grain is matched as identically as possible between each cabinet. Before applying the high gloss lacquer, the cabinets are stained in pairs for cherry shade consistency. 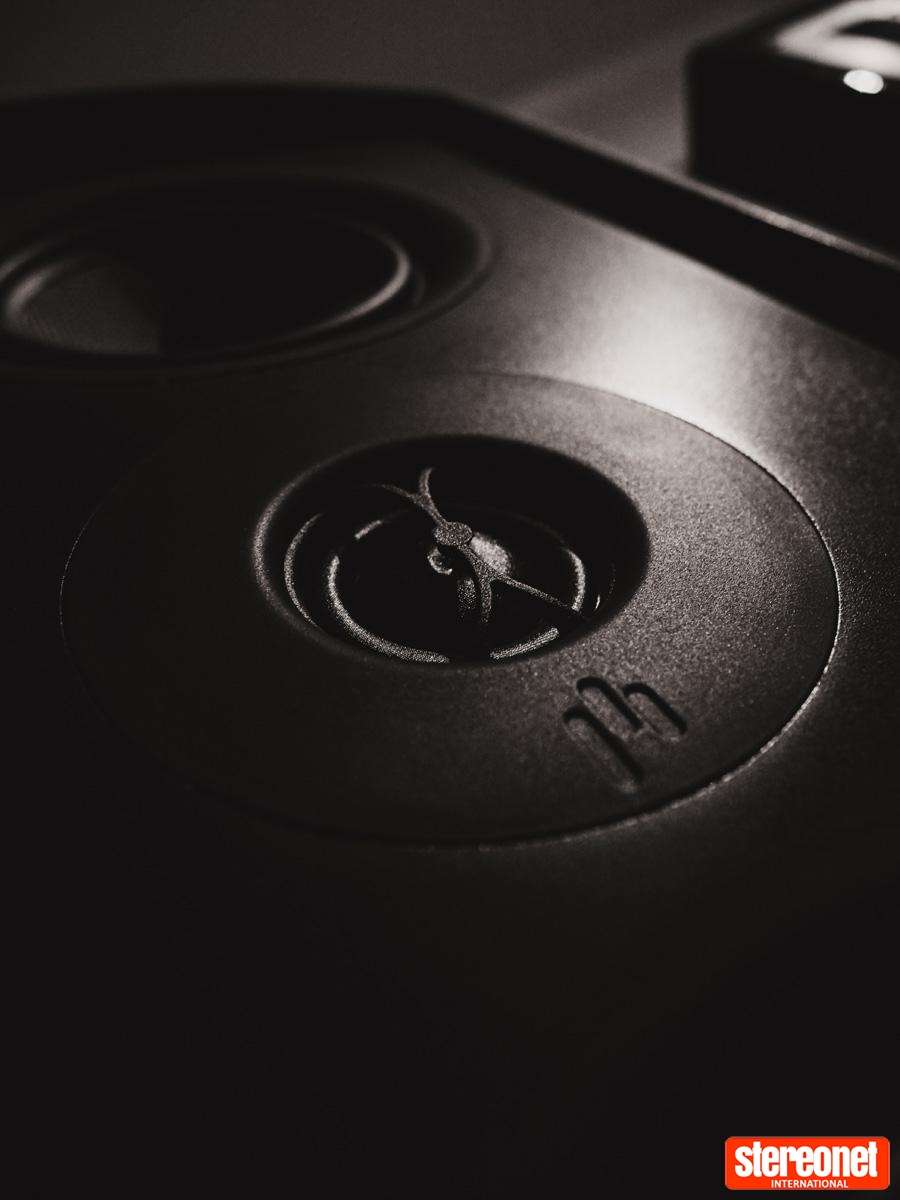 The drive unit complement includes the company's own 1” Aperion ASR Tweeter with ferrofluid damping, plus twin 5.25” woven Kevlar midrange drivers with aluminum phase plugs, and two 8” woven Kevlar woofers with PVC dust caps and rubber surrounds. The crossover is a 3rd order passive type, crossing over 230Hz and 2.9kHz for this 3-way design. They also utilize Aperion custom-made capacitors brandishing the Aperion logo and Aperion made inductors. The manufacturer says these have excellent performance characteristics and maintain a wide frequency response with minor dielectric loss. The V8T crossover also offers a customizable level adjustment to the treble or midrange, allowing users to fine-tune their listening preference.

Claimed frequency response is 30Hz to 30kHz (+/-3dB), which is very respectable, and sensitivity is put at 91dB, which is excellent. Nominal impedance is 4 ohms, a bit lower than is typical, so you'll need an amplifier with good current drive. Power handling is listed as being from 20W to 300W.

As well as looking good, this speaker has to accomplish one other thing to succeed – it needs to sound seriously good. In this, I think Aperion has succeeded. When toed-in slightly, those twin woofers delivered a real punch. Bass was fast and precise, ensuring that I experienced the music's lower notes rather than just heard them. For example, Radiohead's Everything In Its Right Place from their Kid A album was a fantastic match to showcase this speaker's tactile and robust bottom end. Using Tidal through my Bluesound Node 2i, good bass has been a consistent characteristic in every speaker in Aperion's Verus line that I have had the pleasure of listening to – and this latest one is no different.

The V8T had great detail and fantastic clarity without sounding too forward. There was no harshness in the critical midrange region, which can often ruin an otherwise great loudspeaker. Playing Eclipse by Hans Zimmer from his upcoming Dune soundtrack delivered a brilliant combination of instruments and vocals. I heard a very well-balanced interpretation of the song, which allowed the piece to come through with excellent musicality.

I found the treble to be exceptionally well composed and not fatiguing whatsoever. The Concert Towers aren't bright speakers but provide you with plenty of high frequencies well past human hearing ability. The EDM group Pendulum's song titled The Island, from their Immersion album, had the tweeters playing warmer than expected from a dome. This track was meant to awaken the senses by exercising all frequencies in an energetic composition of bass beats, synthesized melodies, and dynamic vocals. It was a party that I didn't want to come to an end. 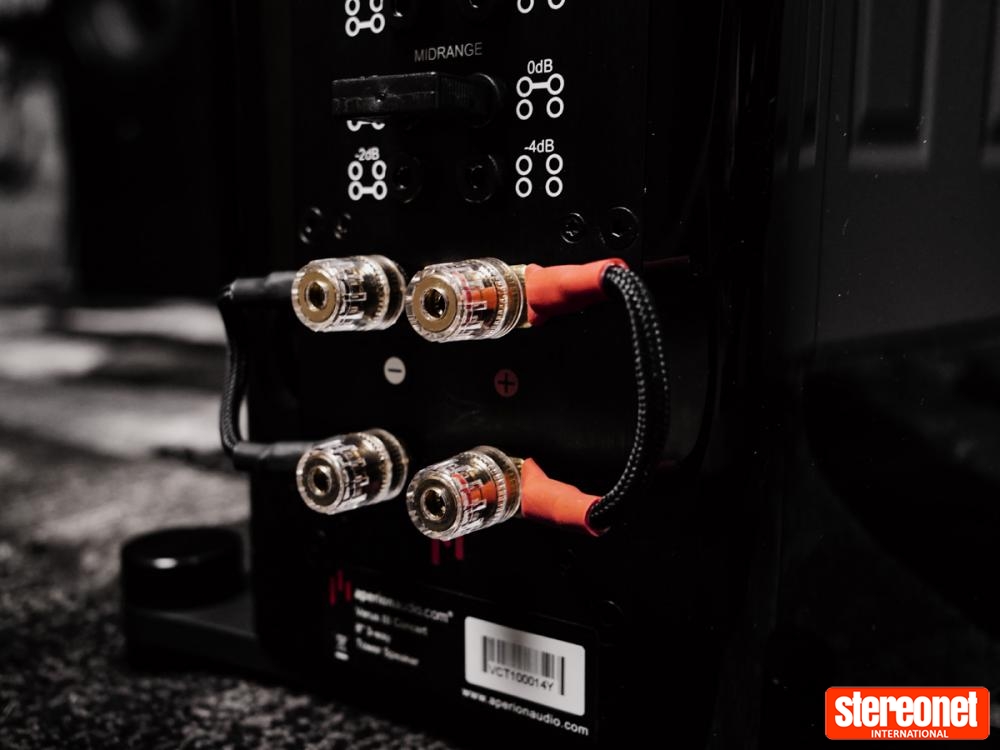 The soundstage was spacious and immersive, permitting Don't Take Your Love Away From Me by Vast to take me back to Sixth Street in Austin, Texas, where I used to hear them play live in smaller venues. The separation of instruments and isolating the vocals allowed me to relive some of the greatest moments I shared with friends during my youth.

Knowing that the Concert Towers nailed music, I wondered if they could do movies? In some ways, the latter is arguably more complex than a musical piece, as it contains location sound, a musical score, dialogue, sound effects, and in some cases, a voiceover. Versatility is critical when creating a speaker for a home theater. The Concert Towers showed their balance and precision in a splendid way when I used Interstellar as a demo played through my Panasonic DP-UB420 Blu-ray player and Denon AVR. The vocals were clear, the action sequences had aggression and demanded your attention throughout the film. The score had so much low end I felt as if my subwoofers were firing off when, in actuality, they were turned off for the demonstration.

When I first received the review samples from Aperion, my expectations were very high, given my experience with the company's previous loudspeakers. Happily, they exceeded my original expectations – a delightful experience from a relatively unknown speaker company that delivered in every category.

Keeping the styling consistent with the Verus family of speakers is an excellent idea for consistency within the line. The V8T is sleek, attractive, and can complement most interior decors. To my ears, its sound is unmatched at this price point. The value you get for the money you pay is incredibly high. After weeks of listening to not only my favorite music but also my favorite movies, I feel these loudspeakers are well deserving of StereoNET's Applause Award.

Overall, Aperion is a brand that I firmly believe will continue innovating new products and enchanting its customers. With the quality of its products combined with its excellent customer service, there's no question that it has a bright future ahead.

Based in Denver, Colorado, Mike is a writer, photographer and audio enthusiast. Music was a creative conduit for Michael growing up an combining his interests even led to being tour photographer for Bone Thugs n Harmony. Later years saw him merge his passions together to create Audio Arkitekts, a resource for all who wander in the world of audio. Michael now joins StereoNET kicking off the North America team.