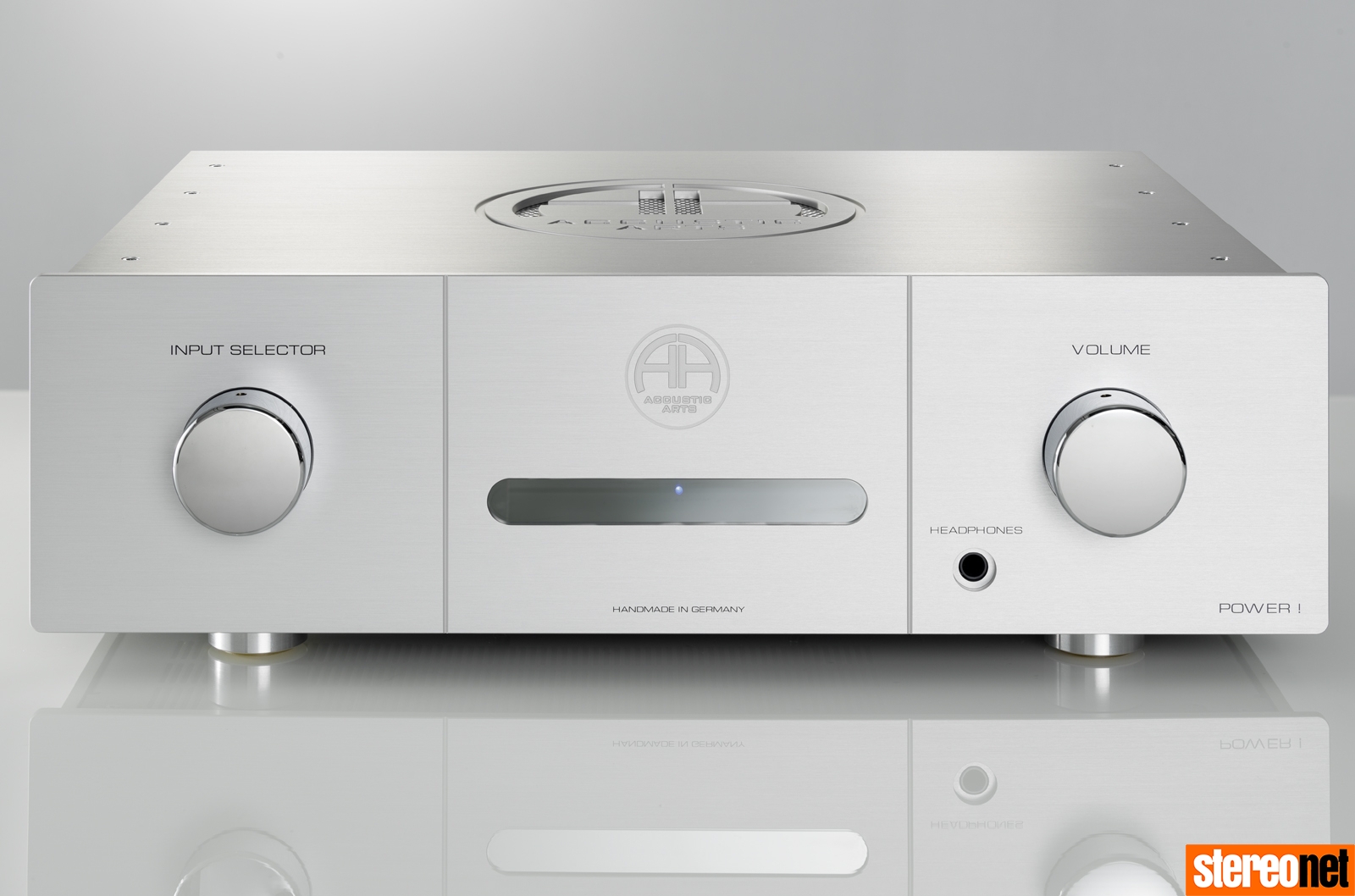 “Handmade in Germany” sits proudly on the front panel of this integrated amplifier, and is a hint as to the quality and design intent of the product – as well as explaining its hefty asking price. There’s a logic to the idea of a country’s ability to design and manufacture products that embody elements of its national character, and German goods are often highly sought after.

The first word of its brand name is not the Germanic spelling of ‘Acoustic’, however. It’s actually a conjunction of the words ‘Accurate’ and ‘Acoustic’, hence ‘Accustic Arts’. The company has been manufacturing since 1997, and the original Power I integrated was released in 2002, with this current model now in Mk4 guise. Over the years it has been improved and refined, but the basics have been essentially correct from the first version onwards.

The Power I Mk4 is a stereo integrated amplifier with two XLR balanced inputs and three unbalanced RCAs, one of which can be configured as a high-level input or ‘Surround Bypass’. It also features a single unbalanced output, configurable as a record out or preamp output. Each of the inputs has a separate digital level adjustment to compensate for the differing sensitivities of sources. There’s a single pair of gold plated multi-way speaker binding posts and a 6.3mm headphone jack on the front fascia. The rear panel is clearly marked, with everything logically laid out and well-spaced in an orderly teutonic fashion.

This big integrated is rated at a hefty 170W RMS per channel into 8 ohms, and 260W into 4. The juice is supplied courtesy of a large 500VA toroidal transformer, with separate windings for preamp and power amplifier sections. A conventional Class AB design, it uses twelve discrete bipolar output transistors bolted to a massive internal heatsink. A comprehensive protection circuit continually monitors the condition of the amplifier, being ready to intercede when the amplifier is clipping, experiences high-frequency oscillations, gets overly hot or if the DC offset becomes too high. 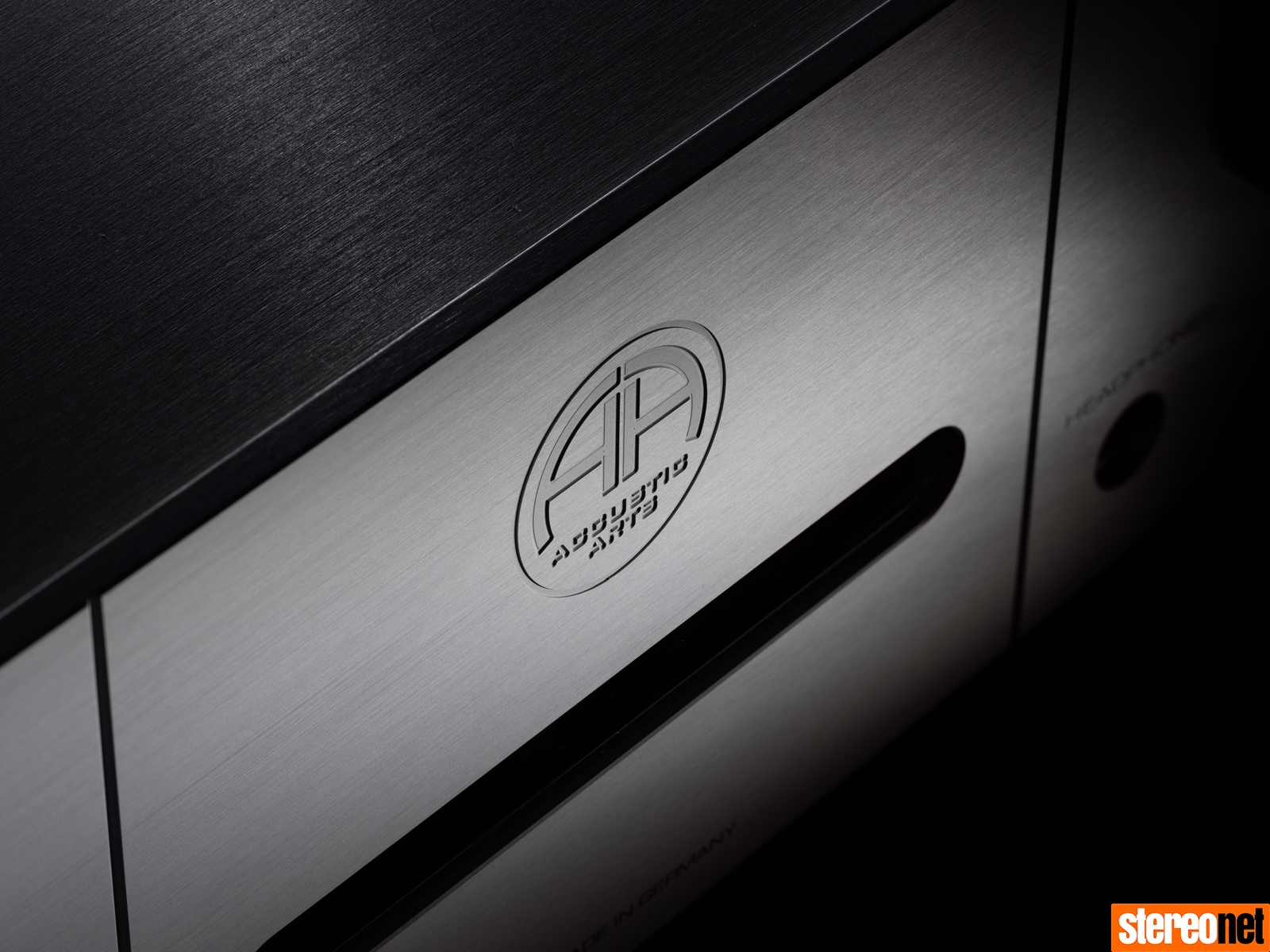 The front panel is quite plain, yet tastefully done with only two knobs – both of which can act as buttons by pressing inwards. They’re made of chromed brass and have a lovely smooth, but weighted feel to them. A small display window with a single line of blue LED numbers is at the centre of the front panel, indicating the input and volume level. It’s also used when making any adjustment to the control settings, like balance, initial volume, input level adjustment and more. It is a simple and elegant solution that once set rarely needs changing. I dislike bright and garish displays, but this one is fine and it can be turned down if that’s what you prefer.

Accustic Arts have done a superb job on the construction of this amplifier, with the fit and finish absolutely first class. Everything is present and tastefully designed without it looking gimmicky; modern but also classical, I can see it ageing well. The top cover of the amplifier has the Accustic Arts logo cut into the metalwork and doubles as ventilation. Internally, construction is neatly and logically laid out, with the large toroidal and heatsink taking almost half the internal space. Incidentally, the amplifier never got more than warm even with heavy all-day use during my time with it. A plastic remote control is included, but only offers volume up and down buttons. It may be limited in its functionality, but at least it’s nice to use.

For this review, I used a Burson Conductor 3X DAC as a source, fed by my modified Bluesound Node 2i streamer and Oppo 203 digital transport. The Power I Mk4 was called upon to drive both my reference JBL HDI-3800 floor-standing loudspeakers and Bowers & Wilkins 705 Signature stand mounters, sometimes to quite high levels.

As you’d expect from this brand, this is a clean sounding amplifier with a largely neutral character. It is even-handed and doesn’t seem to favour or dislike any musical genres, giving its best to everything being played. Lovers of detail won’t be disappointed, and it uncovers tonal shades and textures very well. Music simply flows from this amplifier, so it’s impossible not to like.

Its overall tonal character proved balanced and expressive. There are very few – if any – tonal anomalies introduced by this amplifier. Empires Attraction by Matt Corby, for example,sounded natural with the innate tonal character of the recording itself being clearly heard. The sound of the piano used throughout this album is unique and sounded clearly different to – say – the piano Neil Young uses on any given occasion. Nor does the Accustic Arts artificially sweeten or add glossy sheen to music; it won’t put a harsh spotlight, nor does it editorialise over the source. 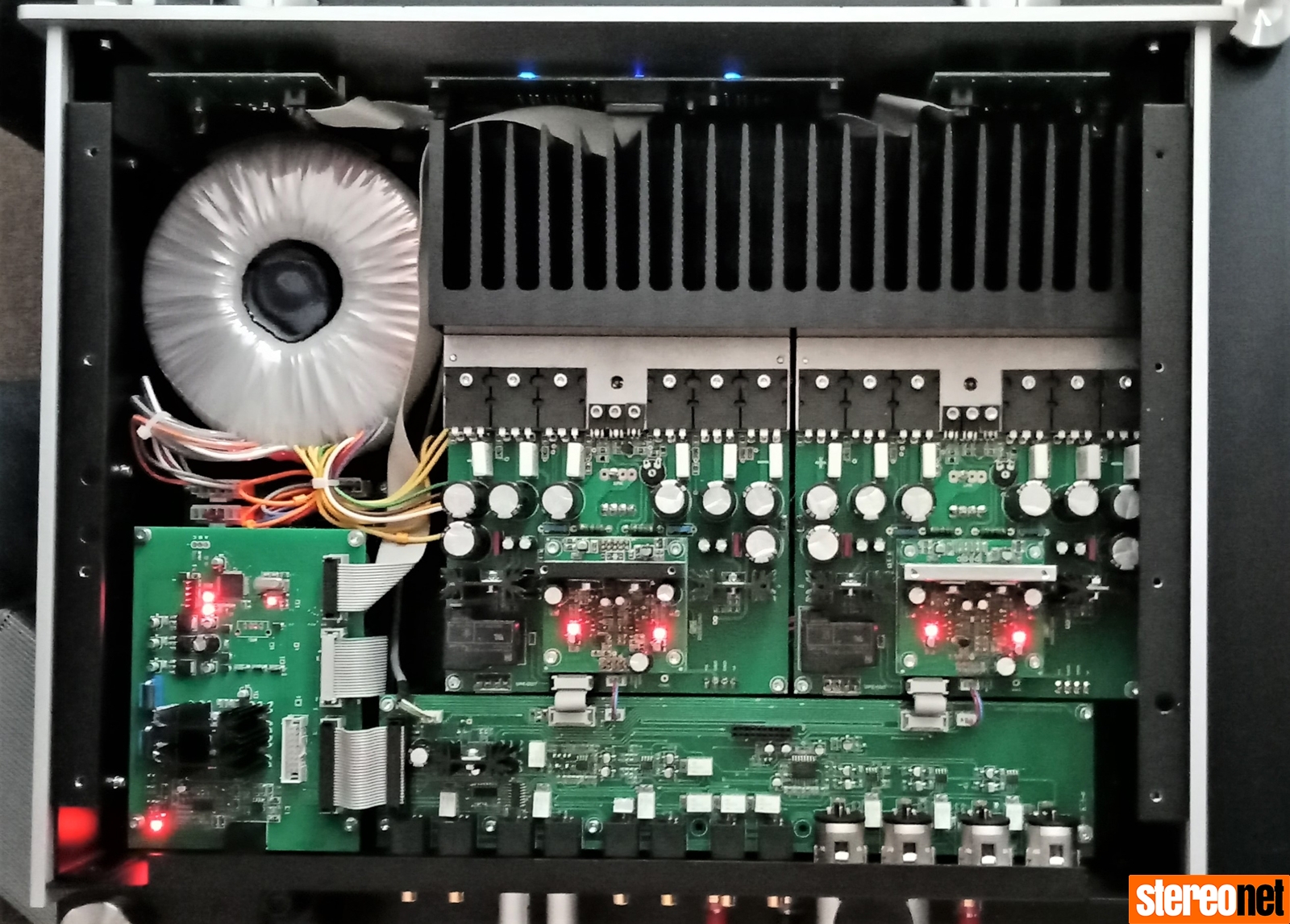 We Are The Hunted by Andy Grey and Gary Numan had a fullness and solidity to the sound with good bass extension, and was nicely balanced across the mids and highs. This track can seem a bit thin through amplifiers that don’t manage the bass very well, but the Accustic Arts had no difficulty at all. Indeed its bass proved slightly on the full and thick side of the fence, if anything.

This amplifier’s midband and treble performance proved detailed and smooth, never drawing any attention from the listener or appearing out of context with the rest of the frequency range. The strings in A Lannister Always Pays His Debts by the NDR Radiophilharmonie & Ben Palmer sounded well controlled through the Accustic Arts. They were neither sharp nor glossed over, just smooth and powerful. The texture and tonal shading, along with the emotion of the track is something that this amplifier delivers very well.

The Power I Mk4 had no trouble delivering the delicacy of the female vocals in De mon âme à ton âme by Kompromat featuring Adèle Haenel, while at the same time allowing the rhythm and grumbling synthesisers to sound industrial. Transparency was outstanding, allowing tons of detail, reverb and effects to make the music sound realistic and interesting. The sonic differences between the CD-quality and high-resolution versions of the same track were easy to hear through this amplifier, especially with TIDAL and Qobuz, something that I have had some fun recently experimenting with.

Listening to American Dream by Ondara gave me an insight into the wonderful rhythmic cohesion of the Accustic Arts amplifier, as it deftly relayed the vibe and swagger inherent in the track. Timing of the numerous instruments was perfectly harmonious, and the great vocal performance added to the rhythmic projection of the track. Without sounding overly dramatic or powerful, this amplifier made the music genuinely good fun to listen to. True, it doesn’t have the sheer wallop and snap of the (twice as expensive) Dan D’Agostino Progression Integrated, but still the Power I did a very tidy job. A hi-res remaster of Peter Gabriel’s Big Time was appropriately clean and punchy, with the notes starting snappily and the whole song sounding cohesive.

The high definition version of Spanish Key by Miles Davis from the evergreen Bitches Brew album sounded huge, with the soundstage extending well beyond the loudspeakers. The Power I has a way of extracting everything possible from a track, whilst doing a great job of delivering a lovely three-dimensional effect, as you’d expect at this price point. David August’s D’Angelo wasn’t spatially short-changed, with all instruments and effects having a specific place in space from left to right and up and down and front to back. This solid-state amplifier isn’t in the league of many valve power amps when it comes to producing a large soundstage, but at least the Accustic Arts doesn’t exaggerate things.

It’s a muscular machine however you look at it – with no difficulty driving my not-particularly-efficient Bowers & Wilkins 705 Signature loudspeakers to uncomfortably loud levels. And it did this cleanly, with no sign of bass bloat or overhang, and without raising a sweat. This is a powerful amplifier with lots of gain and easily copes with heavy and complex music. Overall then, it brings to life pretty much any music you play and has precious few vices. It proved an excellent and versatile listening companion, in an old-school, no-nonsense way. 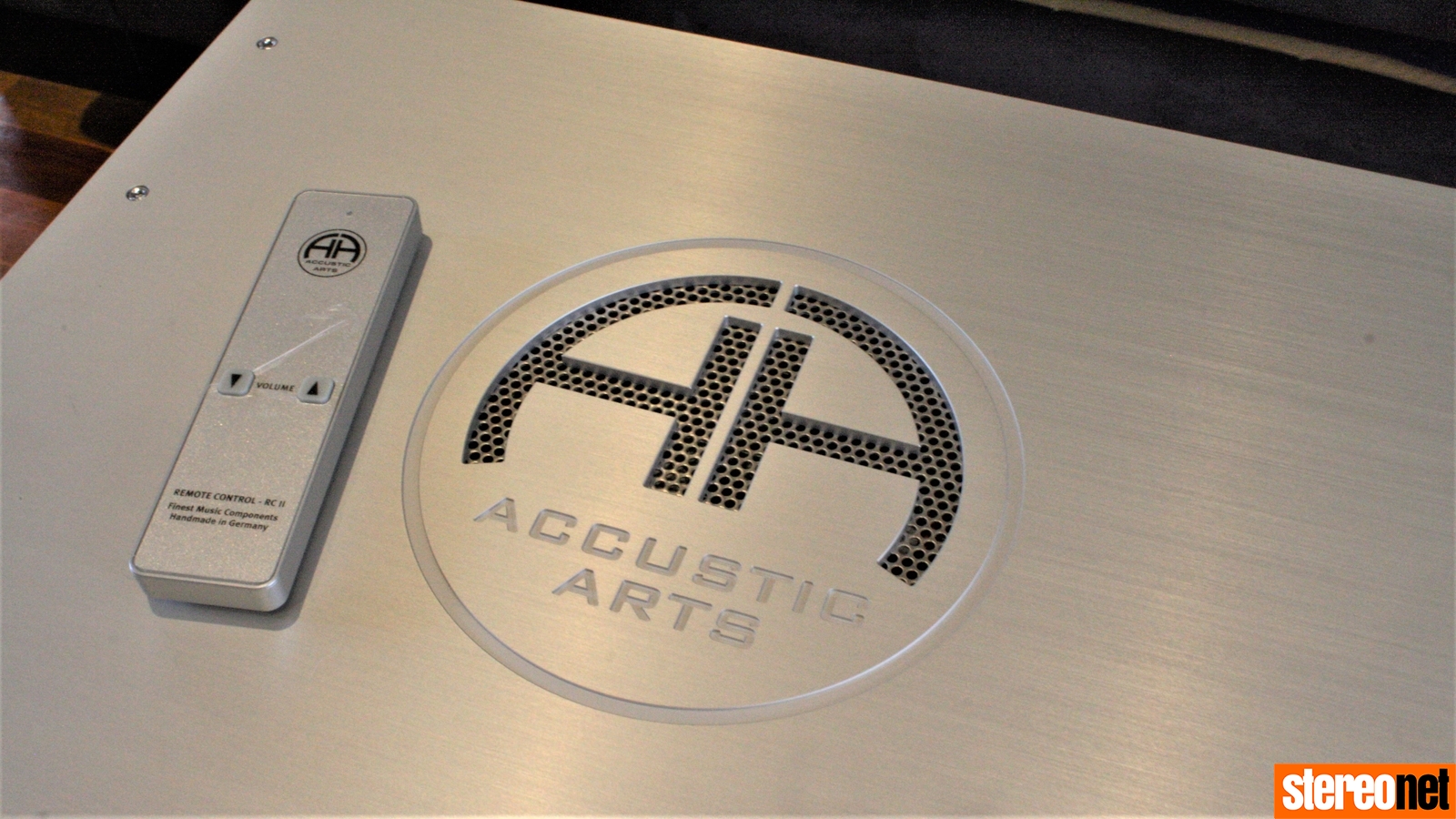 With prodigious power output, excellent sound quality, good connectivity and functionality, the Accustic Arts Power I Mk 4 integrated amplifier makes a very strong case for itself, even at its high price. A kind of Mercedes Benz G-Wagon of hi-fi, it’s an old school product that’s built like a tank, and you can almost smell the quality – both outside and inside. The downside is, of course, its not inconsiderable price, but then again – much as many people try to pretend otherwise – you do get what you pay for. This big integrated amplifier comes with a feeling of quality baked in, and that’s what makes it special.

Starting his first audio consultancy business in the early ’80s whilst also working professionally in the electronics industry, Mark now splits his time between professional reviewing and AV consultancy.