“Excellence. Evolved.” That's the simple but effective summary B&W are using to explain the next evolution, or D4 as it will be known, of its famous 800 Series Diamond loudspeaker range.

The Sound United owned brand asked its Bowers & Wilkins engineering team the question: “How do you improve on the world's most successful and iconic range of high-end loudspeakers?”. And so, some six years later, its new 800 Series Diamond range is a like-for-like replacement of the outgoing series, featuring seven new models. 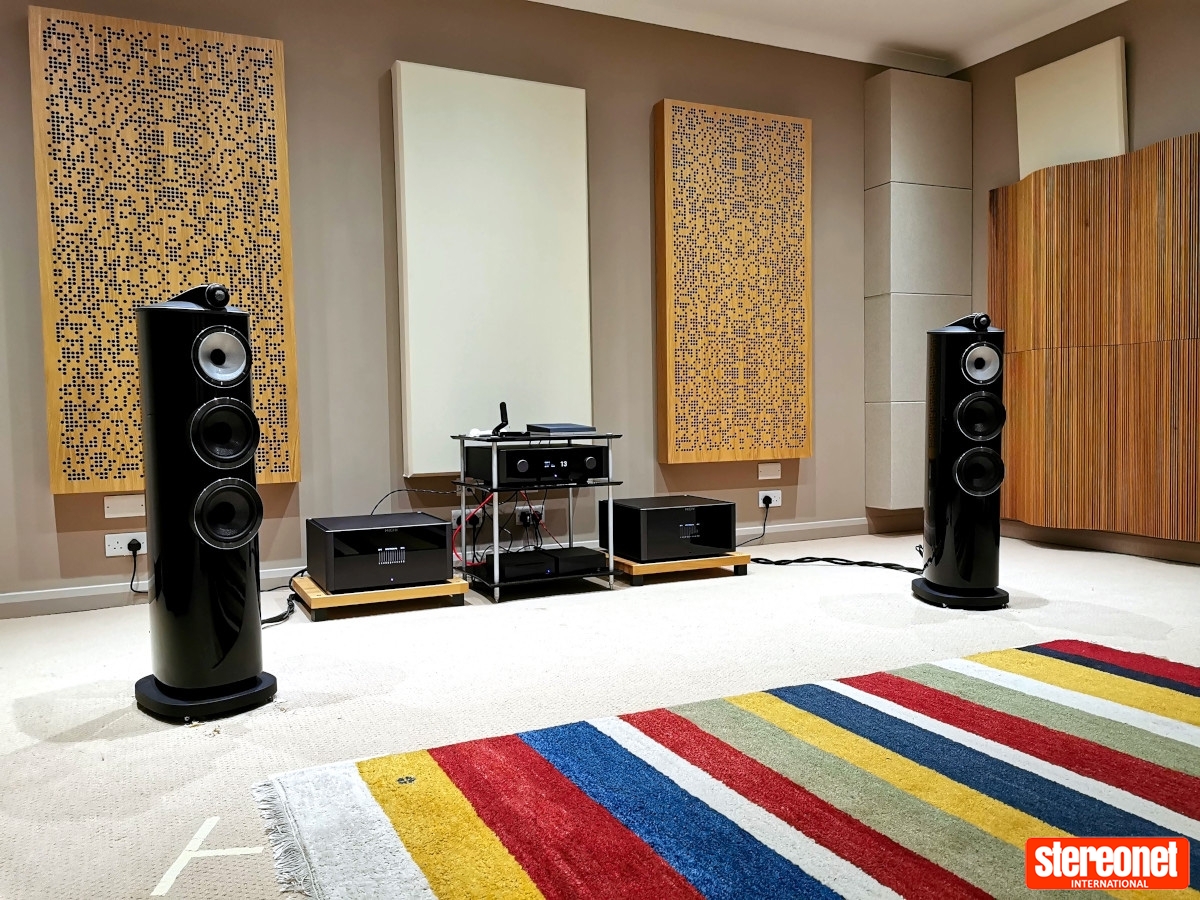 According to the press release:

The range begins with the two-way 805 D4 stand-mount speaker. That's joined by a series of three-way floorstanding models, including the 804 D4, 803 D4 and 802 D4. For the flagship model in the range, Bowers & Wilkins is pleased to reintroduce an iconic name to its portfolio, with the launch of 801 D4 to replace the existing 800 D3. For home theatre use, the HTM81 D4 and HTM82 D4 provide a pair of high-performance centre channel speakers to complete the range.

Encouragingly, the company also says, “every new model in the range combines hundreds of detail improvements plus several entirely new technologies to create the most transparent, detailed and natural-sounding series of loudspeakers Bowers & Wilkins has ever produced.”

For the 800 Series Diamond fourth-generation release, a new finish has been added to the lineup, which included Gloss Black, White and Satin Rosenut. The new range now includes a Satin Walnut finish. 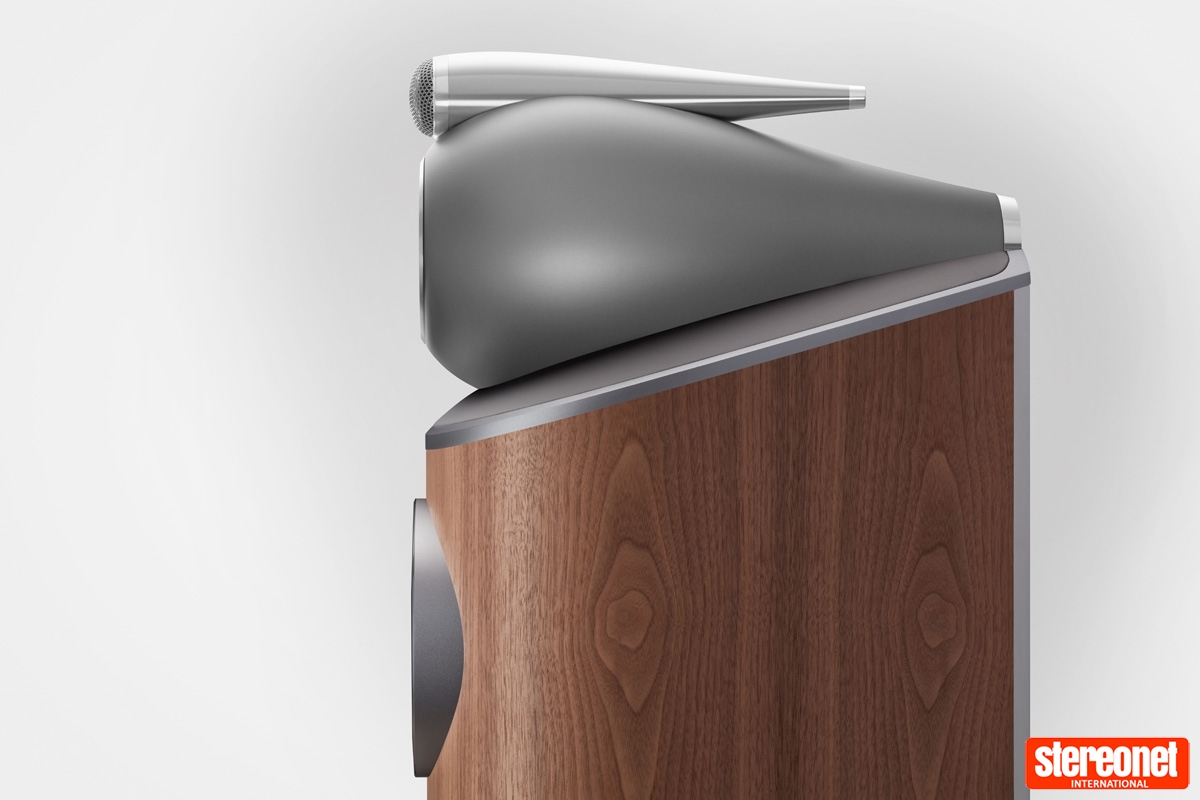 The cabinet design has been upgraded with an all-new, rigid cast aluminium top section for the stereo speaker models, which replaces the previous wooden version. It is said to “offer even greater stiffness and thus improve cabinet quietness still further.” The new aluminium top has also been treated to a 'Leather by Connolly' luxurious upgrade – in black for dark cabinets (Black, Satin Rosenut) and light grey for lighter finishes (White, Satin Walnut). 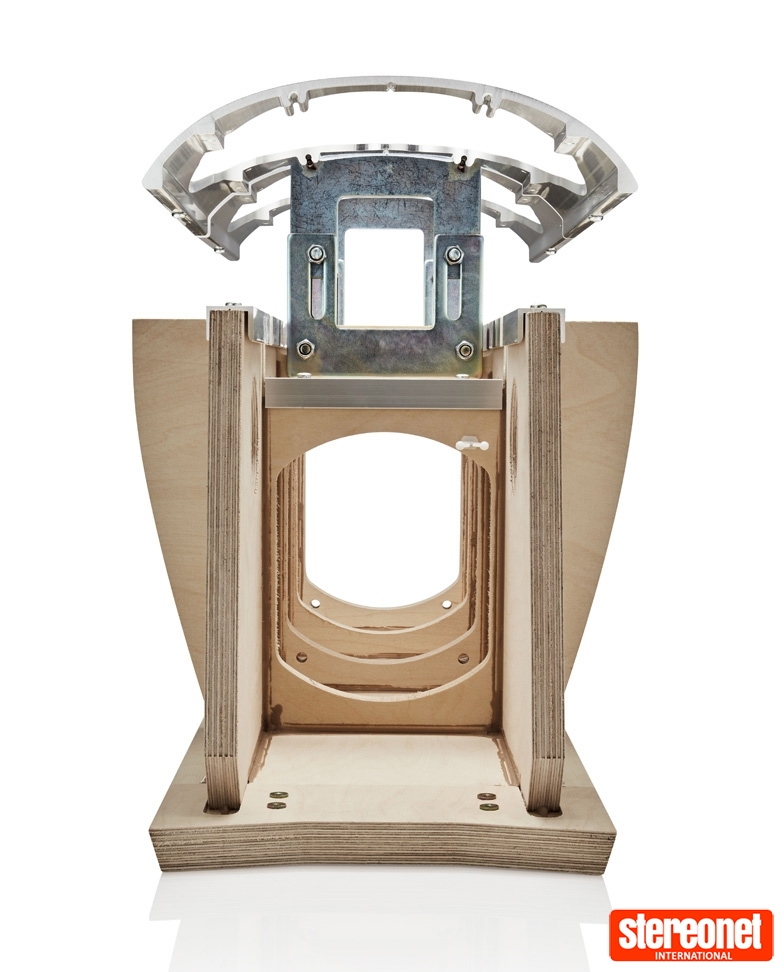 The 'Tweeter-on-Top' housing has also been revised. “with a new, elongated tube-loading system to produce an even more open sound for high frequencies.” Milled from a single block of aluminium, the “supremely stiff enclosure deftly resists unwanted resonance and is an exceptional acoustic form – especially when combined with a new two-point decoupling system that isolates it from the rest of the loudspeaker more effectively than ever.” The anodised finish complements the cabinet and is either dark or light, depending on the cabinet colour. 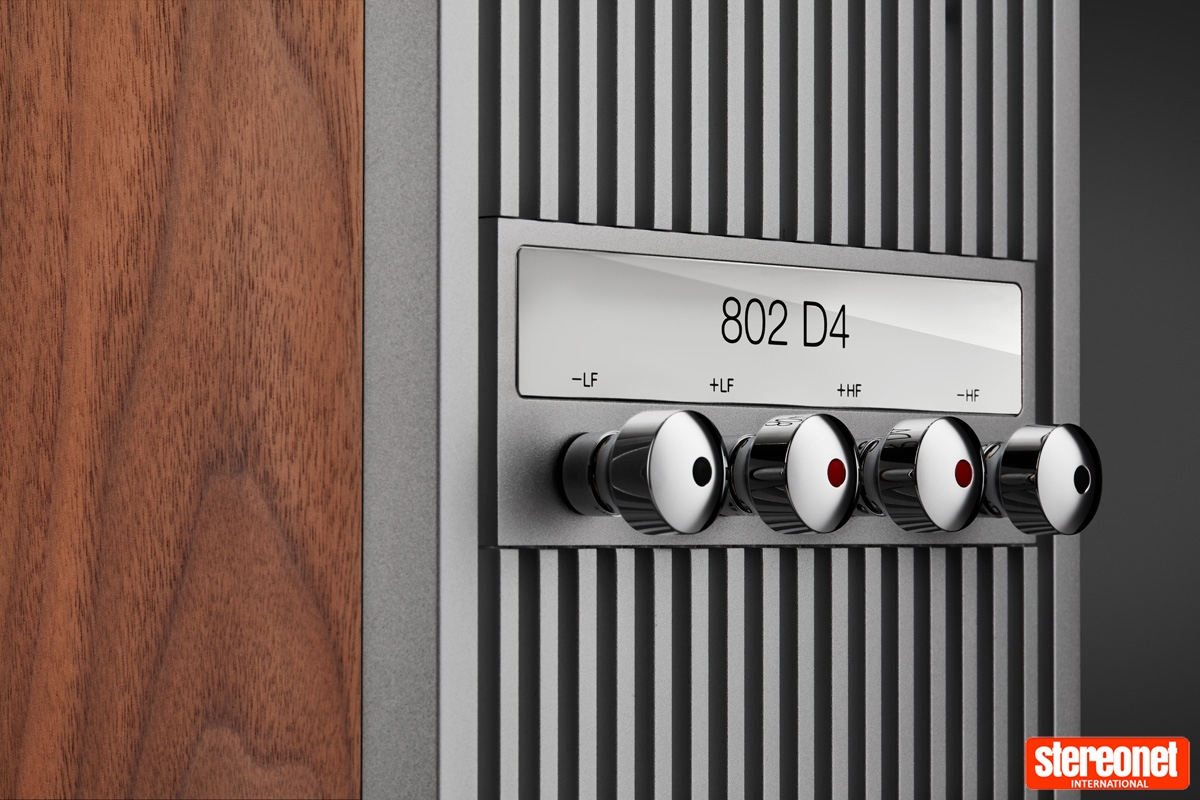 Three new cabinet forms have been introduced in the 805 D4 and 804 D4 stereo models, now adopting the reverse-wrap cabinet design that was first introduced in 2015 for the larger 800 series speakers. This design change has allowed the crossovers to now be mounted in dedicated spaces on the rear of each speaker, housed behind the rigid aluminium spines. For theatre use, the all-new HTM82 D4 centre speaker also adopts the reverse-wrap cabinet form.

The floorstanding models with Aerofoil Cone composite bass cones feature revised and optimised motor systems and are now fitted with a new foam Anti-Resonance Plug. Its purpose is to “brace the voice coil and lower distortion as the cone moves through its operating range, ensuring even cleaner bass than before.” 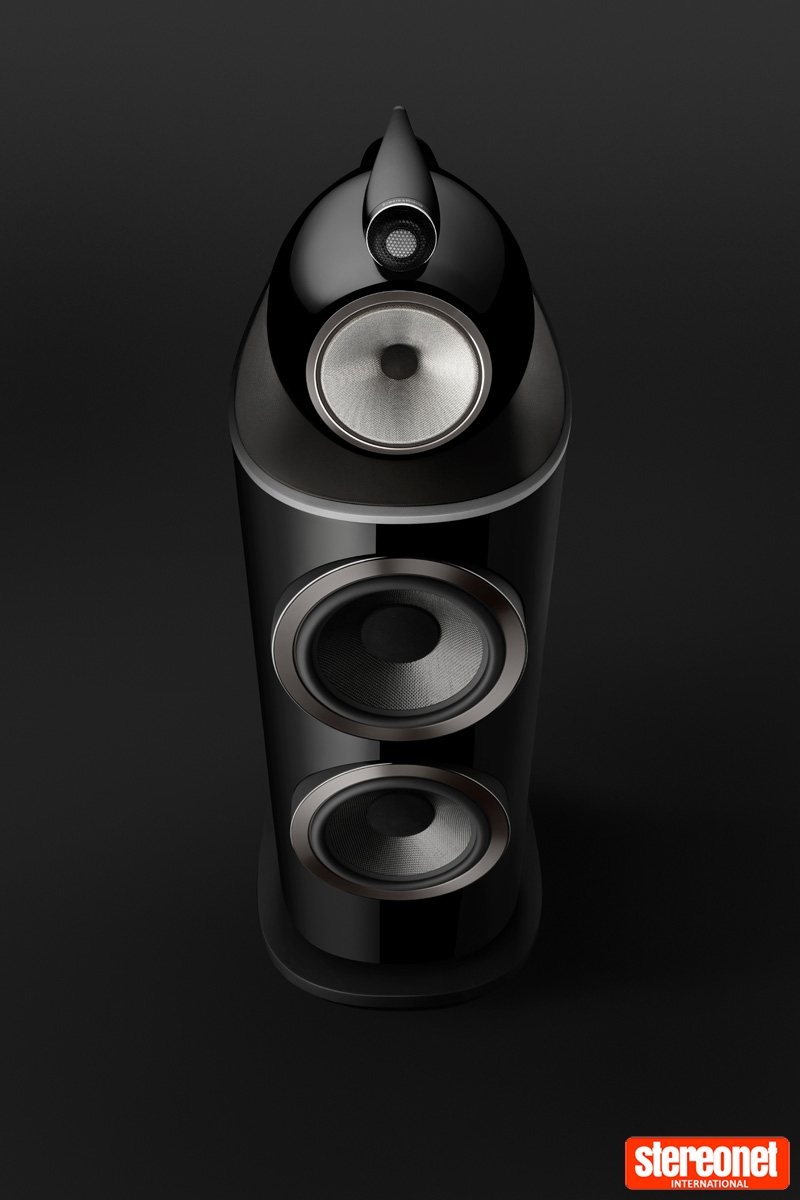 The famed Continuum Cone, along with FST midrange technology, has been retained. However, the complete midrange assembly has been further isolated from the rest of the surrounding cabinet. The midrange drive units in three-way models employ “a highly stiff all-aluminium chassis featuring Tuned Mass Dampers (TMD) to quieten any resonance.” The complete drive units and motor systems are isolated on sprung-mounted decoupling mounts, further restricting the flow of vibration into the assembly. The centre channel speakers have not been overlooked. Each uses a new and similar concept - an internal aluminium enclosure provides a stiff, well-isolated housing for the midrange drive unit and its decoupling mechanism. 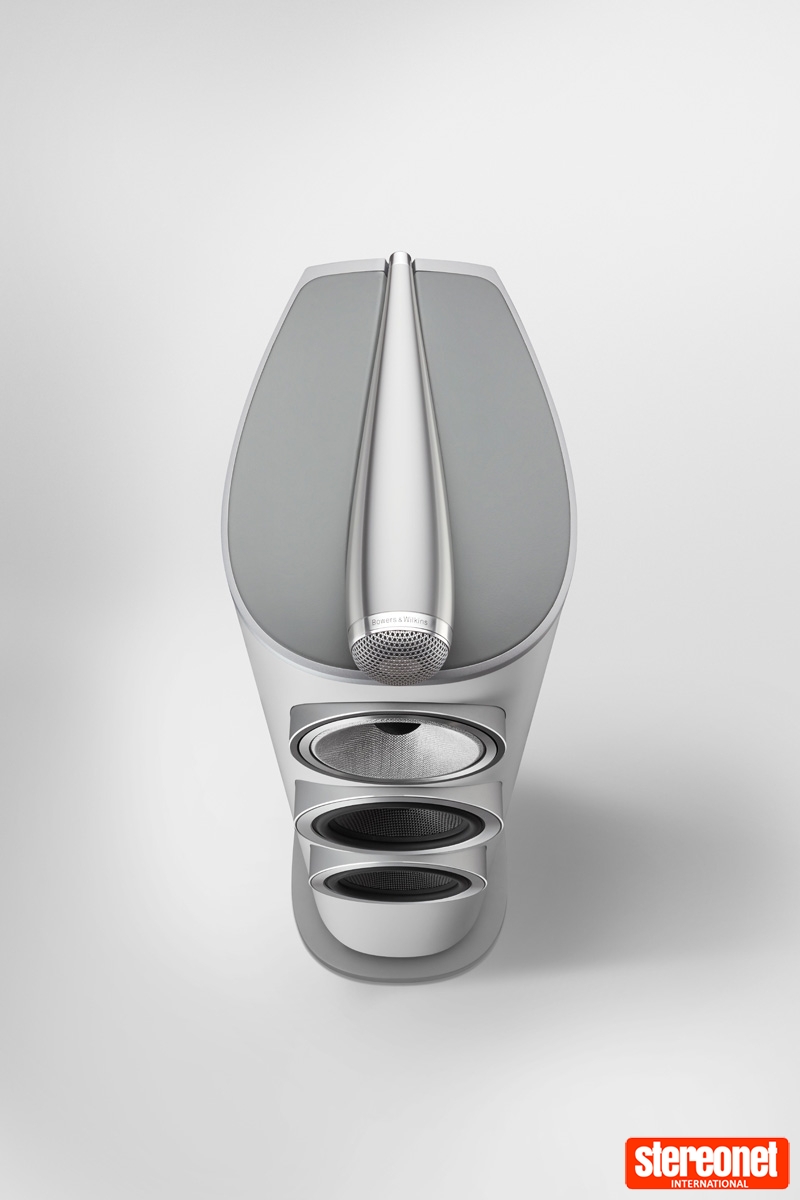 The iconic 800 Series Solid Body Tweeter housing has been revised, further elongated to almost 300mm, with a longer internal tube-loading system. Depending on the model, this housing is now decoupled in two locations rather than one. B&W says, “this notably improves spaciousness and openness.” Further refinement to the tweeter motor assembly allows the drive unit to 'breathe' more effectively with no loss of performance.” 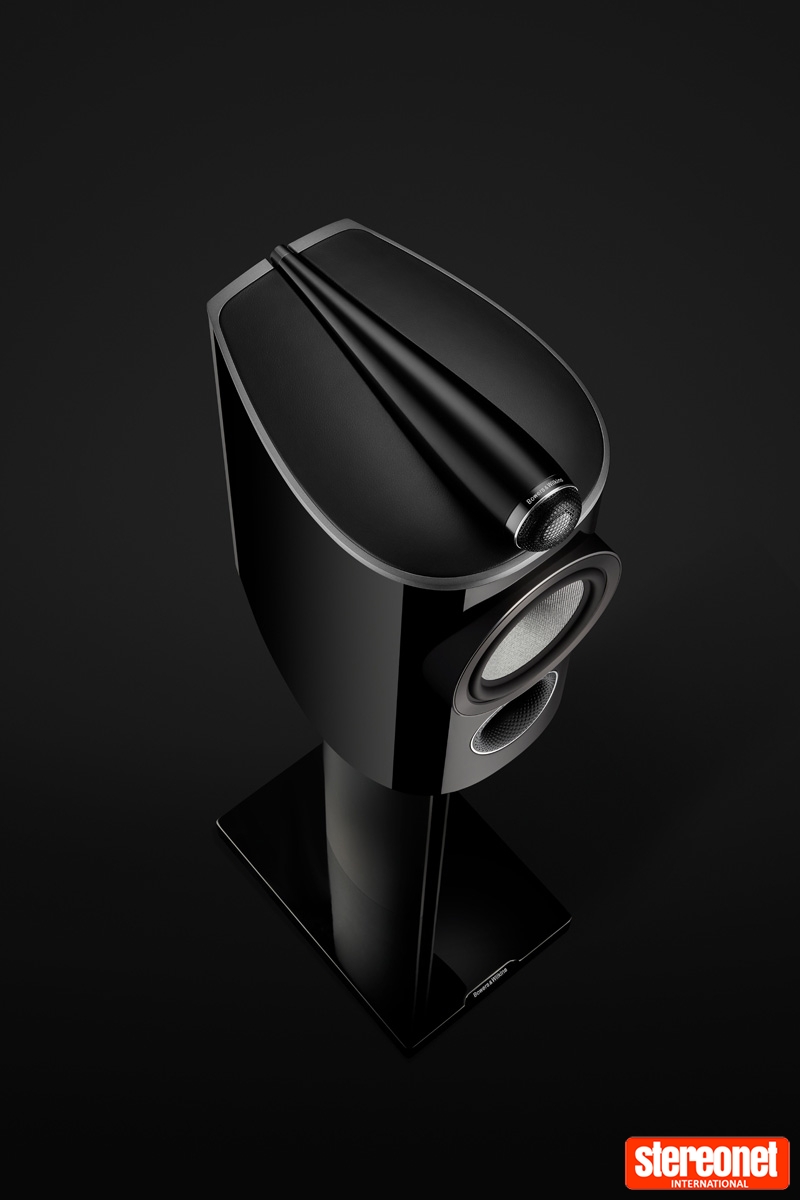